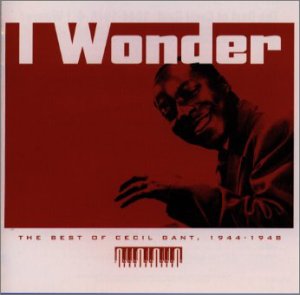 Cecil Gant did a lifetime's worth of recording in six scant years between the release of his first single, the lovely "I Wonder," and his death in 1952 at the age of 38. In between he assembled a ragged legacy of ballads, piano boogies, and urban blues numbers (many of them with the small independent Gilt-Edge Records) that exhibits a distinctly modern awareness of how much personality contributes to record sales. Gant wasn't a particularly gifted singer, but he exuded fun and confidence (and sincerity, as well, on the ballads), and his piano skills often sacrificed technique for energy and power, attitude traits that make him, in many ways, a prototype figure for rock amp; roll. This collection has early Gilt-Edge tracks like "I Wonder," which started it all, but lacks his next two Ramp;B hits, "Grass Is Getting Greener Every Day" and "I'm Tired," which were both released in 1945, and what may be his finest song, "I'm a Good Man But a Poor Man," released in 1952 on Bullet Records. But there is plenty to treasure here, particularly Gant in hipster mode for the impossibly likeable "Hit That Jive Jack," which sounds a bit like Nat King Cole trying to do a Louis Armstrong impression and -- wonder of wonders -- pulling it off in style. Gant exuded winning charm, and he sang well enough, and was adept enough at the piano, to put it all over, and it is a true pity his career was cut so tragically short. He changed the way the record business worked, though, by proving that an unknown artist (and a black one, no less) recording on a small, regional label could generate a financially pleasing result, and "I Wonder," aside from being a great song and performance, ultimately ushered in a golden era for independent labels. ~ Steve Leggett, Rovi

India's biggest and most trusted destination for Men's lifestyle

The mensxp.com privacy policy has been updated to align with the new data regulations in European Union. Please review and accept these changes below to continue using the website. We use cookies to ensure the best experience for you on our website.
Agree & continue