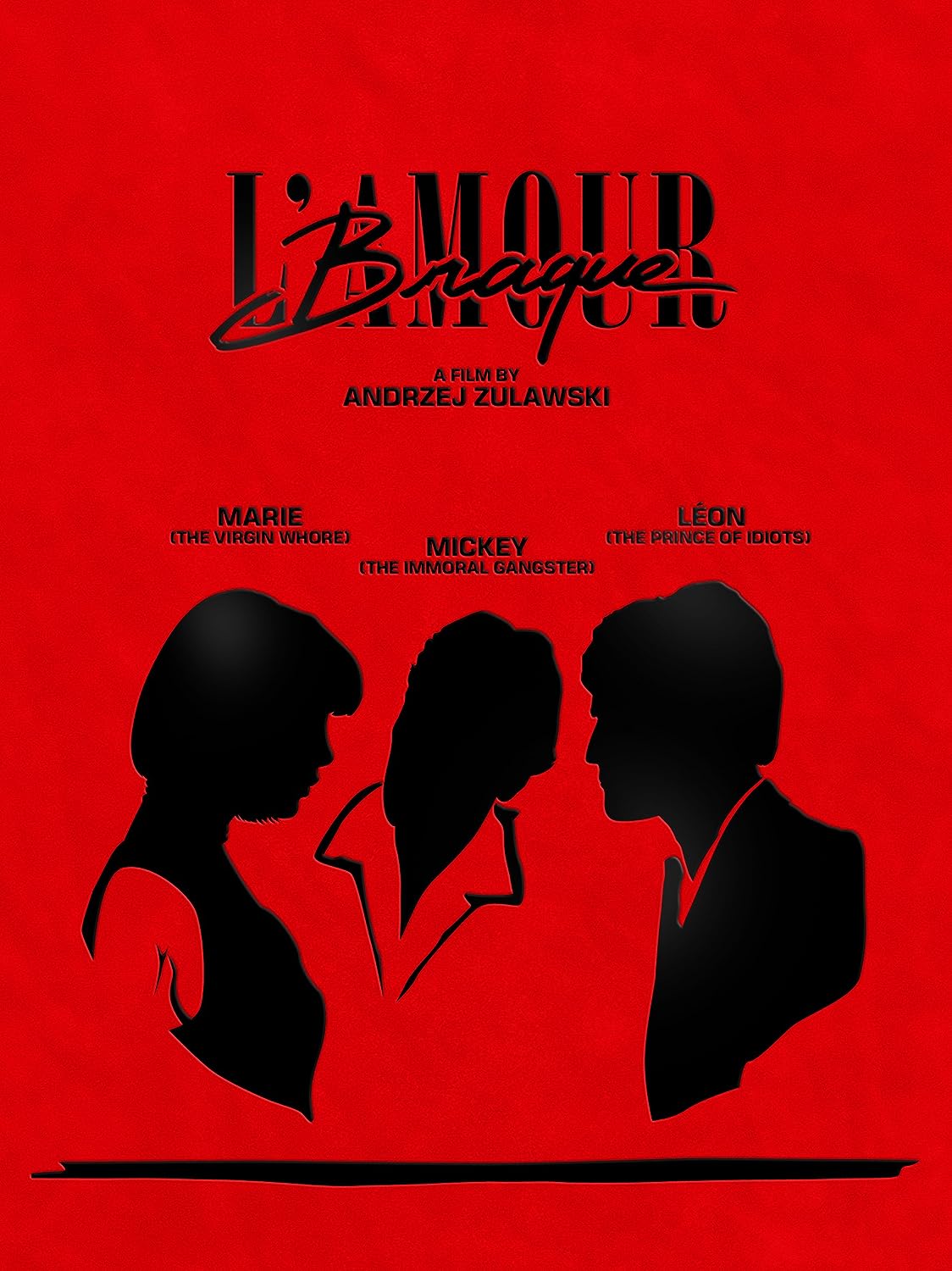 ANDRZEJ ZULAWSKI'S L'Amour Braque (Limpet Love) is the story of a hideously bloody vendetta, of bonds of friendship between two men from opposite backgrounds and of love within an eternal triangle. Intended as homage to Dostoyevsky and loosely based on his novel 'The Idiot', L'Amour Braque is a mad love-triangle: Léon (The Prince Of Idiots), Marie (The Virgin Whore), and Mickey (The Immoral Gangster). Zulawski's postmodern existentialist adaptation is presented with an intense sense of visual style suggestive of the hyper-realistic and chaotic world of Bande-Dessinée. Abundant with images that persist and last in memory, from start to finish the screen is filled with outbursts of energy and eruptions of emotional violence where "notions of 'performance as madness' are choreographed into a perverse, bloody ballet." L'Amour Braque displays craftwork of originality and imagination in which "moments of brilliance happen under the watchful eye of a knowing master."

Exclusive 64pg Booklet including a newly written essay by Daniel Bird + Rare and Insightful Essays amp; Interviews [retranslated and published for the first time ever in English]

Note Regarding English Subtitles: (Optional) Available in White amp; Yellow
The dialogue of L'Amour Braque presents a number of challenges for the translator. Roda-Gil s dialogue abounds with rhymes and puns, not to mention a plethora of (mainly French) cultural and political references, often specific to the 1980s. Director Andrzej Zulawski prepared the subtitles for this DVD release in collaboration with Daniel Bird. It was decided quickly that a technically precise translation of the original French into English would lose the playful, anarchistic character of Roda-Gil's dialogue. Here, Zulawski has opted for the title Limpet Love. The character of 'Marie' has been changed to 'Mary', so as to retain the Christian aspect of the character's name. For rhymes in French, equivalents in English have been sought. Therefore, a looser approach has been adopted, which strives to offer something of the flavor of the original.

In "L'Amour Braque", Étienne Roda-Gil has known how to find words, and Andrzej Zulawski the images, which revive in us a strange resonance which has the sweetness of a dream and the familiarity of a memory. And, whatever the story is that these words and images tell, the important thing is this resonance, this healthy tremor that simply tells us that a world without emotions is a world without meaning. --Michèle Halberstadt (1985)

Zulawski is "cool", as the teenagers would say. His immense culture glorifies instinct above knowledge. He doesn t talk forever about elaborate themes of tragedy he generously throws them onto the ground where everybody is walking. Of course, you have to make a small effort yourself to pick them up and take them with you, after each of his films, a few of the cries and tenderness from this Polish man... But these images persist and last in memory... Like everything that helps us to live and that stays alive, because, once again, only emotion will survive the kinds of catastrophe or madness that man can create... In the place of emotion, you of course have to put love... But Zulawski's films don't talk about love. They make love. --Étienne Roda-Gil (1985)

The film shows us an apparently erratic and fragmented labor from the point of view of the actor, but at the same time there are these results; these moments where something emerges from the actor s face, and from the body. More and more, Zulawski's films seem to resemble workshops of creativity, where actors take part in exercises of relaxation and vocal and physical dislocation, where moments of brilliance happen under the watchful eye of a knowing master. --Michel Chion- Cahier Du Cinéma, (N°369), March 1985

Andrzej Zulawski was born on the territory of what was then the U.S.S.R. in a Polish family with remarkable traditions in arts and literature. After World War II, his father's diplomatic career brought the family to France (1945-1949), Czechoslovakia (1949-1952), and finally to Poland. He studied film direction at IDHEC in Paris (1957-1959) and philosophy at both Warsaw University (1961) and Université de Paris (1962-1964).

First, he assisted the famous Polish director Andrzej Wajda during the filming of Samson (1961), Popioly (The Ashes, 1966), and the Warsaw episode of L'Amour à Vingt Ans (Love At Twenty, 1962). In 1967, Zulawski directed two short films, Piesn Triumfujacej Milosci (The Story Of Triumphant Love); and Pavoncello, for Polish TV.

His feature debut, Trzecia Czesc Nocy (The Third Part Of The Night, 1971), as well as those previous films were co-scripted by his father, poet Miroslaw Zulawski. The picture was well received at the Venice Film Festival and awarded as the Best Debut in its homeland, but had only limited release due to Polish censorship. Zulawski's next feature, Diabel (The Devil, 1972), was outright banned and not released until 1988. The same happened to his next Polish project, Na Srebrnym Globie (The Silver Globe, 1977/1987). After he finished about 80 percent of the shooting, the authorities ordered him to abandon the picture and to destroy all related materials. Only in 1987 did he manage to complete the film from spare footage, using voice-over commentary for the missing parts.

Since the late '70s, Zulawski has lived and worked mostly in France, during which time he developed a knack for showcasing his actresses' talents. L'Important C'est D'Aimer (The Important Thing Is To Love, 1975) brought its star, Romy Schneider, a Cesar (French Oscar) as did Possession (1981) to Isabelle Adjani. He then found his muse in young actress Sophie Marceau who would star in four of his films; they were married for 17 years and have a son together named Vincent. He briefly returned to Poland where he made Szamanka (She-Shaman, 1996). Being a maverick who always defied mainstream commercialism, Zulawski enjoyed success mostly with the European art-house audiences. His wild, imaginative, and controversial pictures have received 16 awards at various international film festivals. Zulawski has written over 25 books including the acclaimed novels Il était Un Verger, Lity Bór (a.k.a: La Forêt Forteresse), V Oczach Tygrysa, and Ogród Milosci.

The purpose of iBelieve.com is to help women wrestle with the deeper issues of how their faith relates to the world around them. It seems that Christian women today are facing a set of challenges unique to their generation. With an emphasis on personal experiences, our goal is to create a team of writers and bloggers looking to share how they have seen the struggles and triumphs of life through the lens of the Christian faith. We hope to create a place where our audience can feel uplifted by authentic examination of what it means to be a Christian woman in today's culture.Read daily devotions for women, blogs by your favorite Christian female bloggers, articles on faith, relationships, health and beauty, food and home, and motherhood. iBelieve.com also provides Christian ecards and inspirations to encourage and uplift your sisters in Christ!