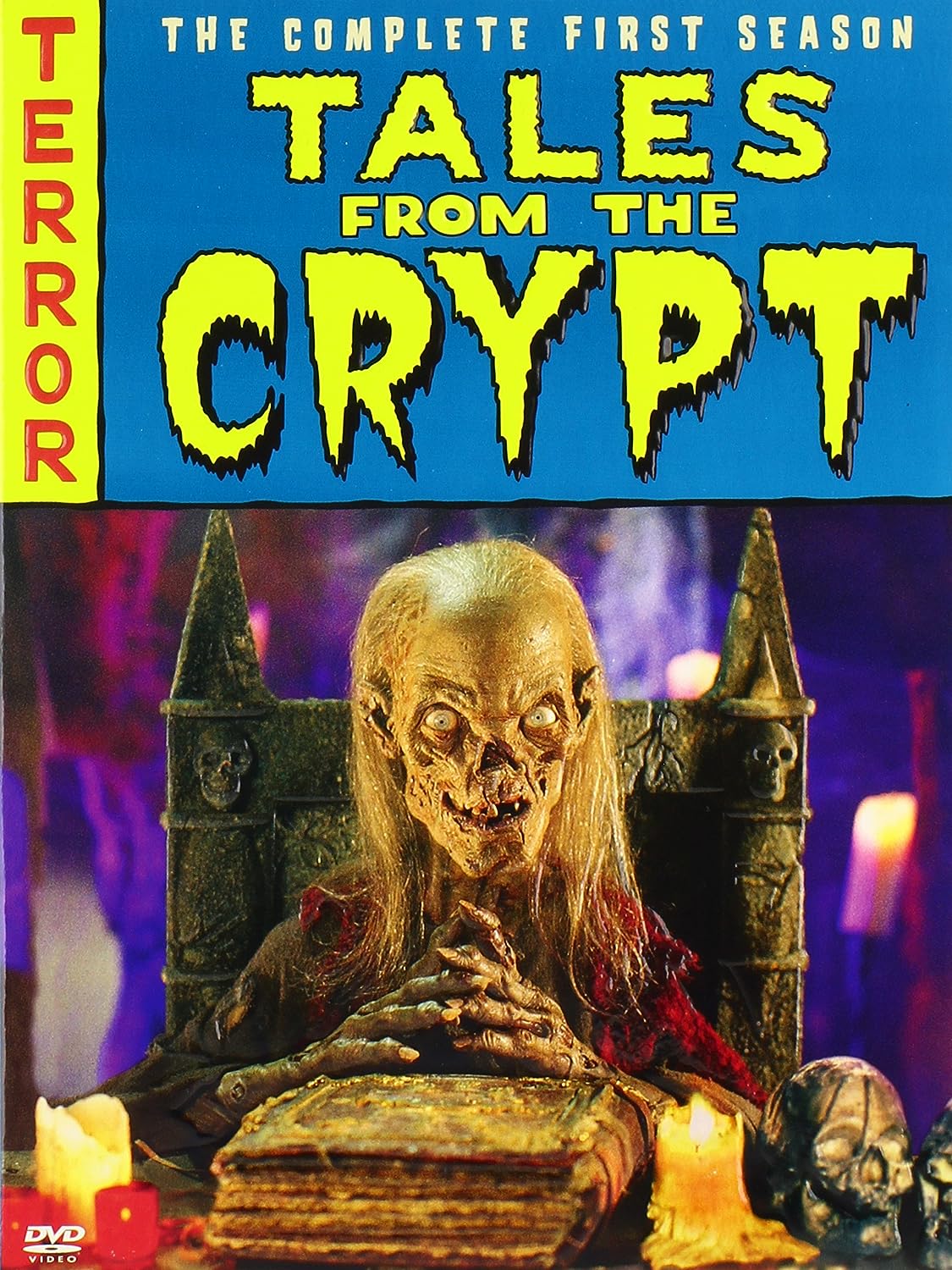 Tales from the Crypt: The Complete First Season (DVD)

Rest your bones, boos and ghouls, and settle in for the anthology series you’ve been dying to see: the complete six-episode first season of Tales from the Crypt! Cadaverous scream legend the Crypt Keeper hosts these forays of fright and fun based on the classic E.C. Comics tales from back in the day – and drawing on the talents of top filmmakers Richard Donner, Walter Hill, Joel Silver, Robert Zemeckis and more. So shamble up to the bar and pick your poison. Will it be an insane Santa on a personal slay ride? A man surgically implanted with as many lives (and deaths) as a cat? Honeymooners from hell out to fulfill the “til death do we part” vow ASAP. These and other terror-ific tales await in the first season of dead-on humor and horror!

Here's some grisly good news for fear fans: the first season of HBO's long-running TV horror anthology Tales from the Crypt, based on the notorious '50s-era E.C. comic books, emerges on DVD in a two-disc set that's sure to have 'em shrieking (with joy, of course). Shepherded by a host of top Hollywood producers and directors (including Joel Silver, Richard Donner, Robert Zemeckis, and Walter Hill), the Tales from the Crypt series brought together major talent both in front of and behind the camera to give life to E.C.'s over-the-top stories of gruesome revenge and ghastly terror. Season 1 offers six star-studded spooktaculars, including Donner's "Dig That Cat He's Real Gone," with The Sopranos' Joe Pantoliano as a carnival performer with a knack for surviving horrible endings; Zemeckis's "And All Through the House," with Larry Drake as a homicidal Santa Claus terrorizing a woman who has just killed her husband (this story was also adapted in the 1972 theatrical version of Crypt); and Hill's "The Man Who Was Death," featuring a topnotch performance by William Sadler as a jailhouse executioner who takes the law into his own hands. Comic purists may decry liberties taken by updating the original stories (and current audiences may find elements in some episodes out of date, most notably Mary Lambert's "Only Sin Deep"), but the blend of gore and black humor should keep most horror heads happy, as should the chattering presence of the animatronic Crypt Keeper (well-voiced by John Kassir), who serves as the show's ghost host.

The two-disc set's chief extra is an interesting documentary about the original comics, featuring interviews with co-editor Al Feldstein and legendary artist Jack Davis, as well as directors and authors inspired by the comics like George Romero, John Carpenter, and R.L. Stine. The Crypt Keeper also weighs in with a new intro for the DVD, as well as his reminiscences of the first-season episodes, complete with plenty of behind-the-scenes production photos. In short, pleasant screams are ensured for all. --Paul Gaita

Fun Ways To Announce Your Pregnancy

When Will My Belly Show?

51 Ways To Save Up For Baby

When Will I Feel Baby Kick?

10 Things You Have To Do Before Going To Labor

Signs Of Labor To Watch Out For

How To Get Pregnant Fast

How Long It Really Takes To Get Pregnant

11 Things To Avoid When Trying To Conceive

Breastfeeding Positions To Make It Easier

Tips For How To Get Baby To Sleep

6 Moments You Need To Let Dad Have With Baby

How Big is Baby