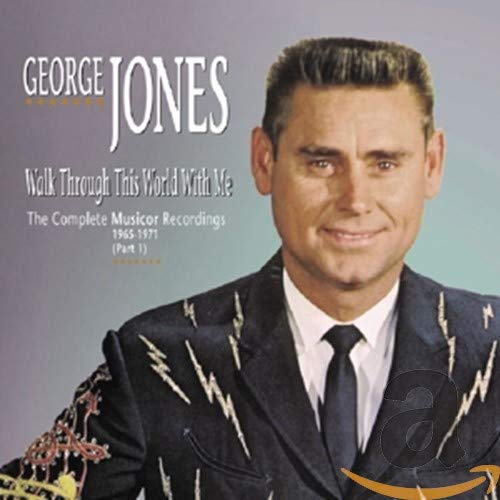 (5-CD LP-sized box set + 48 page book) These were George Jones' truly classic years. After more than a decade as one of country music's top stars, newfound maturity and soulfulness augmented what was already the greatest voice in country music. The six years from 1965 to 1971 that Jones spent on Musicor Records were marked by personal turmoil and unprecedented success, but through it all he kept minting one country standard after another. This is the first part of Bear Family's comprehensive two volume edition of Jones' complete Musicor recordings, covering all sessions from 1965 until mid-1967. Until now, the Musicor sides were randomly packaged and many were unavailable, but the two Bear Family boxes (plus one CD of duets with Gene Pitney available elsewhere on Bear Family) will tell the complete story. Here are the fabulous original albums, including his tribute to Dallas Frazier and the duet albums with Melba Montgomery, plus such all-time George Jones standards as Things Have Gone To Pieces, Love Bug, Take Me, I'm A People, Four-O-Thirty Three, and one of the greatest ever country classics, Walk Through This World With Me. It's all here in stunningly restored sound together with ten previously unissued recordings, including fabulous early versions of Love Bug and Take Me, recorded in Houston.

In all, this set includes 142 songs on five CDs, plus two complete sessions from Houston with false starts and alternate takes. In 1971, George Jones broke acrimoniously from Musicor's co-owner, Pappy Daily, who'd discovered and nurtured him, to join his new wife, Tammy Wynette, on Epic Records. The hits, of course, would continue, but George Jones would never sound as good again!

This set includes liner notes by Rich Kienzle and a complete discography by Don Roy, Kittra Moore, and Richard Weize.

The most amazing videos from the BBC

Solutions for a sustainable world

Joy and her family are among 2m Nigerians living within 4km of a gas flare in Nigeria's oil-rich south.

On Air: The Newsroom

More around the BBC

BBC in other languages