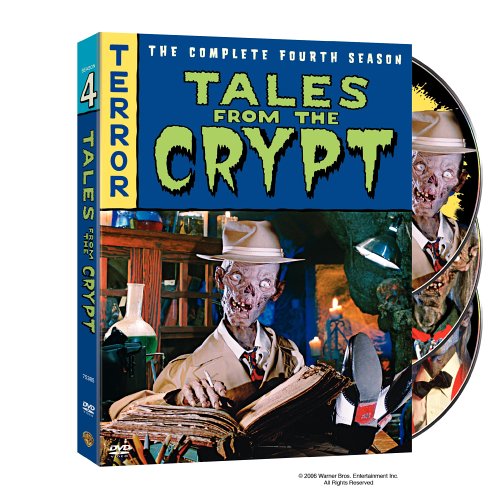 Tales from the Crypt: The Complete Fourth Season (DVD)

Monsters. Madness. Mayhem. And, of course, the Crypt Keeper’s bad puns! Tales from the Crypt returns from the grave once more to reanimate the best in humor and horror. Check out all 14 Season 4 episodes hosted by the comically cadaverous Crypt Keeper. Here for your warped amusement are the episodes “Split Personality,” about a lounge lizard (Joe Pesci) getting more than he bargained for when he marries identical twins; “Werewolf Concerto,” with Timothy (“Bond James Bond”) Dalton on the hunt for a lupine fiend; and “Beauty Rest,” with Mimi Rogers as an actress who'd kill for a part. Plus keep an eye out for Tom Hanks, Sugar Ray Leonard, Dylan McDermott, Christopher Reeve, 80s rocker Adam Ant and a hot-rodding Brad Pitt in these frightfully fun tales from filmmakers such as Lethal Weapon’s Richard Donner, The Walking Dead’s Frank Darabont and The Matrix’s Joel Silver.

The Cryptkeeper dusts off another set of horror yarns in this fourth collection of Tales from the Crypt, featuring more semi-big-stars, a handful of name directors, and a bevy of excruciatingly bad puns. There are some goodies here if you're nostalgic for 1950s-era comic-book scares (or for vintage 1992 late-night pay-cable), but this fourth season represents diminishing returns for the franchise. The 14 episodes get off to a poor start with the first installments, including "None but the Lonely Heart" (directed by Tom Hanks, who cameos), about a Lothario (Treat Williams) who marries and kills rich old ladies, and "This'll Kill Ya" (directed by Robert Longo), about a nasty drug researcher (Dylan McDermott). The series' very sporadic nudity is provided here by Sonia Braga.

Of the famous directors represented, best in show is John Frankenheimer, whose "Maniac at Large" makes sinuous use of a single set, a large library; Blythe Danner plays a meek librarian in fear of a serial killer, and Salome Jens (star of Frankenheimer's "Seconds") is her shrewish boss. Elsewhere, William Friedkin should be embarrassed by "On a Deadman's Chest," an extremely silly rock amp; roll thing about a tattoo with a life of its own. And Richard Donner's "Showdown," while providing a welcome bit of Western atmosphere, is either an existential puzzler or an unfinished production. The directorial novelty must be "Split Personality", a story of a con man (Joe Pesci) seducing a wealthy pair of twins. It's one of the more entertaining episodes, and it marks the sole directing outing for Hollywood mega-producer (and Tales exec producer) Joel Silver. For sheer perversity, few segments top "Beauty Rest", in which aspiring actress Mimi Rogers ends up regretting a successful audition (with Buck Henry, of all people).

The biggest rising-star find is probably Brad Pitt in "King of the Road", a lame tale of hotrod racers. Timothy Dalton, then fresh from his James Bond run, stars in one of the better shows in this set, "Werewolf Concerto," a clever piece about a werewolf hunter staying at a lodge terrorized by a lycanthrope. Perhaps the most sustained episode--nailing the series' blend of campy humor and gory fright--is "What's Cookin'," in which Christopher Reeve, the owner of an all-squid restaurant, revitalizes the business by switching to a different kind of meat.

The minimal extras are a commentary track for the Chris Reeve episode (including the voice of the Cryptkeeper, John Kassir) and a perfunctory montage about the season's stars. The show has a loyal following that will be happy to own this set, but for anybody else it must be noted that season 4 is a year of decline, and not the place to start for horror-curious boils and ghouls. --Robert Horton

Beginner's Guide
Will the Circle Be Unbroken
Lists

Thanks to our sponsors for supporting independent media

Steve Gunn : Other You

Album of the Week

A Beginner’s Guide to the ambient pop of Grouper

Slipknot’s Iowa is a masterpiece of pain

Celebrate the Catalog: The albums of Parliament-Funkadelic

Celebrate the Catalog: The Yob discography

King Tubby: A Beginner’s Guide to the prolific dub innovator

How The Shins’ Oh, Inverted World captured a timeless simplicity

U2 tapped into a well of light on The Unforgettable Fire

Stay up to date on the latest news, reviews, interviews and more.